The easiest way to learn more about Silent Running products is to understand what makes sound. Sound is just a disturbance in the air. When the air vibrates your ears interpret it as sound. So basically, it takes something moving or vibrating to make a sound.

Take the stereo in your vehicle as an example. There are two things involved in your stereo, the radio or power source and the speaker. The power from the radio moves the speaker back and forth. If you want more volume you must add more power or turn up the volume knob. What do you think would happen if you added some weight to the speaker? It would not be as loud. That's because it takes more power to move the additional weight. How about if you could take weight away? The speaker would become even louder at the same place on the volume knob.

So you can make things louder or quieter by adding weight to the part that makes the sound, in this case the speaker. You could also do it by adding or subtracting power, in the case of your radio, watts. That's all the volume knob is doing, varying the amount of power the speaker gets.

Driving along in you vehicle you basically encounter two types of noise, airborne and structure borne.

Airborne noise is coming from someplace outside your vehicle. Tyre noise is the best example of airborne noise; a loud exhaust is another. This noise is generated outside of the vehicle and comes in through the windows. The easiest way to get rid of this noise is to roll up the windows. If that still doesn't work, then you may need to do other things like switch tyre brands.

Silent Running is made to stop structure borne noises. These come from vehicle vibrations in the body panels, the engine, the suspension, the A/C system and more. With all these unwanted vibrations in check, the vehicle is much quieter on the freeway.

The old way of removing unwanted noise was to add heavy asphalt mats to the body metal. Believe it or not, this is still done today. What these heavy mats do is add mass to the body panel, often as much as the panel itself. This doesn't remove the vibration; it just lowers the intensity.

Here's why: like in the speaker example above, the speaker keeps playing; it’s just not as loud. That's because with the same power vibrating the panel, it can’t move the extra weight as easily. The problem vibration is still there. Remember sound is logarithmic. So if you added twice the weight to the panel, it wouldn't remove half the sound, only enough that you could just hear it. You would have to add lots of asphalt mats to get rid of half the noise.

Instead of being a Band-Aid and trying to cover up the sound, Silent Running works like a cure for the vibration problem. It actually gets rid of the vibration by converting it into low-grade heat.

What happens is the back and forth vibrations, or mechanical energy, are converted to thermal energy or heat. It would take a thermometer that could read down to .001 degrees to see it, but this "viscoelastic" conversion is what happens when you use Silent Running coatings.

Have you ever pushed on a rubber-like substance that didn't come back to its original shape as fast as you pushed it in? That's just what Silent Running is doing. It doesn't offer much resistance in one direction, but there's a lot in the other direction. The metal can move easily in one direction, but not the other, something like a speaker that could only move out and not back.

Silent Running does exactly what it says it does... stops unwanted noise and vibration. 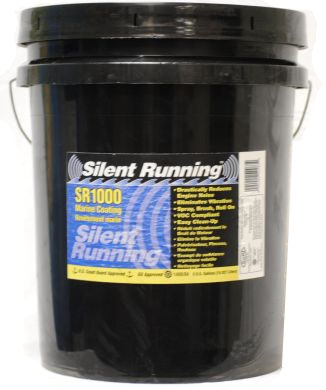